Not just Another Emulation

Reviver creates harmonic distortion, a sound which is often connected to vintage gear. It does not emulate analog equipment, but instead gives the user full control of overtone generation and volume. Despite this high level of controllability, Reviver's user interface is intuitive and provides the desired result after just a few mouse clicks.

You can buy Reviver online in our shop or via PayPal for just $29.

Second order harmonic overtones play an important role in the sonic coloration that tube amplifiers add to audio. The sound produced by tubes is often perceived as "warm" and "smooth". Using Reviver it is possible to add second order harmonics to your sound in a very precise way.

Third order harmonic overtones change a sound more aggressively, with the effect often referred to as "punch", "fatness", or "detail". These overtones are also created by tape and overdriven solid state amplifiers. With Reviver you have exact control over third-order harmonic generation to give your sound that extra lift.

A general problem of digital distortion plug-ins is that instead of only generating the desired harmonic overtones, they also create aliasing artifacts, i.e. overtones which are in disharmony with the original signal. Aliasing is an exclusively digital problem that does not appear in analog signal processing. Reviver is completely free of aliasing in audible frequencies. Click here to find out more about aliasing. 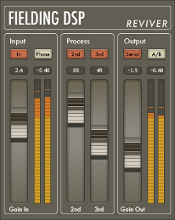 This sample features both 2nd and 3rd harmonic overtones used in Reviver's parallel mode. Listen to how Reviver evens out the sound and enhances the bottom end.


All files are level-matched, slight variations are a result of mp3 encoding.

“[...] ANY[ONE] has to check this out now, trust me. It is SWEET, SUBTLE saturation. It's one of my very favorites, most people that tested it think it's great like I do.”

“A secret weapon in so many cases, where the material needed inaudible distortion to fatten up. Thumbs up for the new version [...]”